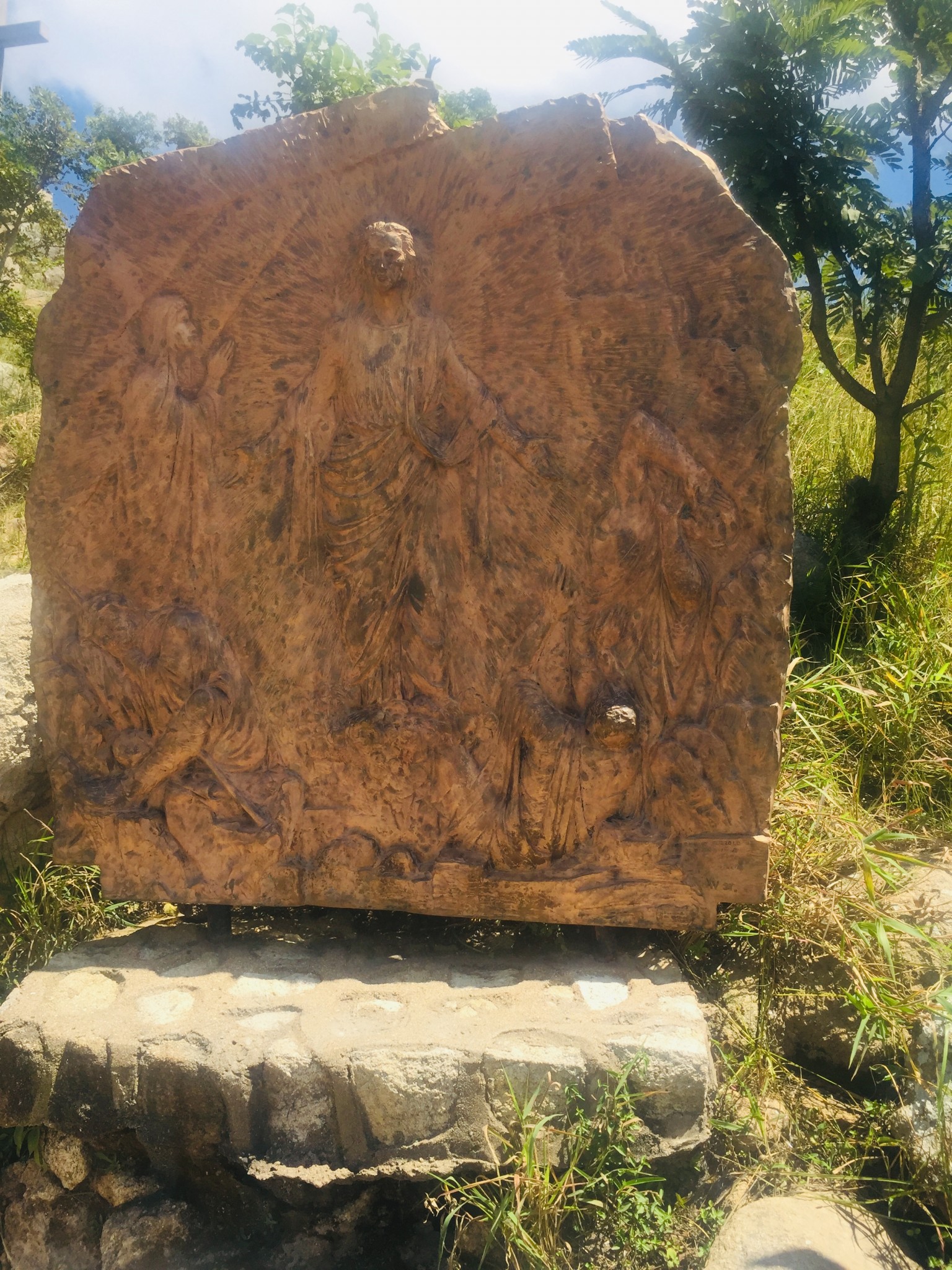 Three days after the resurrection! The strong stone boulder of the tomb is nearly crumbled by the radiant light that is shed from the risen Christ.  Jesus appears suspended in midair in all His divinity and blazing, regal majesty. Nothing shows the terrible sufferings He experienced. It is He, the Messiah, the Son of God, who returns with glory as He had promised! At

His appearance, the guards of the tomb are like victims of an explosion, they are thrown into confusion. All humanity is present in this impressive and conclusive scene and is represented by three witnesses. On the left is a sleeping man. He is the “symbol” of those who are and remain indifferent to the mystery of the death and resurrection of Christ. On the right is a terrified man who is covering his eyes. He doesn’t want to see. He is the crushing failure of those who reject with the resurrection the transcendent immortality of Christ .At the center is one who opens himself to the light although it is already late.

Now the Virgin can adore her Son-God in the glory of the Father.

From the Bible: On the event of that first day of the week, even though the disciples had locked the doors of the place where they were for fear of the Jews, Jesus came and stood before them. “Peace be with you”, he said. When he had said this, he showed them his hands and his side. At the sight of the Lord the disciples rejoiced.

We adore you, O Christ, and we praise you.
Because by your holy cross you have redeemed the world.

All would have disappeared like smoke in the wind. They would have dispersed like fog. But you are resurrected, O my Lord Jesus. Suffering has been transformed because of the resurrection. Death has been defeated. Hope has been healed. Love has received its deepest foundation and its motivation. Hate and hurt have been uncovered. A new reign is arriving; Yours, O Jesus, a reign of resurrection and of thanks, of joy and of peace.

O resurrected Jesus, may your strong light penetrate us and disperse every darkness from our hearts, from families, from the Church and from the world so that in every place there will be, in harmony with you, a new song of joy and salvation. Allow each one of us to shout, “Alleluia” because you are alive and reigning. The tombs open and those that were spiritually dead receive new life. No one who has been guided by you will be excluded from the court of the resurrection.

Message: Dear children! Today i would invite you to grow in love. A flower cannot grow normally without water. So not even you, dear children, can grow without God’s blessings to fulfill your duties in union with God. Thank you for having responded to my call!

We thank you, O Mary, and we bless you.
Because by your sufferings you helped to redeem the world.

O Mary, your joy is great, even greater than the amount that you had to suffer. You know how necessary the resurrection was for us. So, O Mother of the risen Lord, intercede so all of us can discover ourselves in the final joy of the resurrection.

For He whom you deserved to bear, Alleluia, Has risen as He said, Alleluia. Pray for us to God, Alleluia, Rejoice and be glad, 0 Virgin Mary, Alleluia, For the Lord is truly risen, Alleluia.